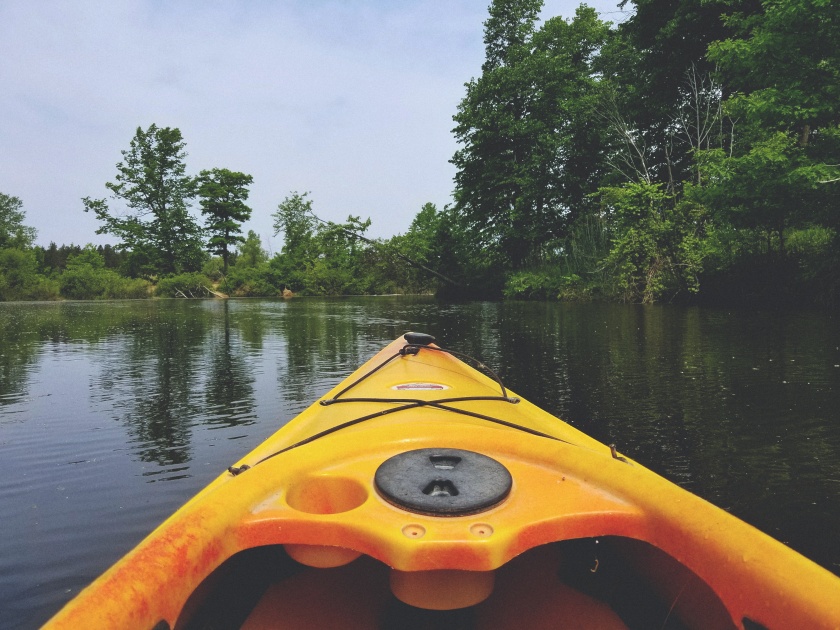 I woke up bright and early Sunday morning to go explore the thumb of Michigan. My first thought was to go kayaking around Turnip Rock, which is right up at the tip of the thumb, in Port Austin. We set out on the 2.5 hour car ride up M53 at around 8:30am. Not quite early enough, but given that the trail takes around 4 hours, we thought we had plenty of time.

We were wrong. After we arrived at the kayak rental place, they said that they would stop renting kayaks to Turnip Rock at 10am (we got there around 11:30am soo….). I had been wanting to do this for a while, so was pretty bummed about not being able to go. These feelings didn’t last long because we were able to rent kayaks to use around Port Crescent State Park, which is also in the tip of the thumb.

With a double kayak in tow, we set off into the river, on our way to Lake Huron!

The kayaking trail was gorgeous! It was a beautiful day out (it was also 100 degrees outside, but oh well). Along the trail we saw swans, turtles, and tons of birds!

The river led to a beach that was right on Lake Huron. These great lakes always amaze me. You’d think they were an ocean! The beach was really nice. It was long, so you could take a long walk along it. It is also only accessible by boat, so it wasn’t too crowded, and you could see all the kayaks and canoes lined up along the shore. A lot of people brought their lunch along. Gus and I opted for a nap in the sun.

We hung out on the beach for a little while, and then walked back to our kayaks. The trip only took about an hour each way, and you were able to go at a pretty leisurely pace. You can rent the kayaks from Tip-A-Thumb Canoe and Kayak Rental. Our double kayak only cost $30 for the entire day. They continue to rent out kayaks until 4pm, and all boats must be back by 6pm!

After we returned our kayaks, we started to make the drive back down to Royal Oak. On the way down, we noticed signs for the Pioneer Log Village and Historical Museum in Bad Axe. We decided to stop by, as it was right on our way home. We were not disappointed! This Log Village is exactly what it sounds like. They are old log cabins, filled to the brim with historical antiques from around Huron county. They have an old one-room classroom, a house, a general store, and blacksmith room, and a barn. They’re only open from 2-4pm on Sundays, which was incredibly lucky because we showed up at 3pm. Members of the Bad Axe historical society showed us around and gave us some context about what happened. Walking around took 30 minutes, and was well worth the time!

Overall, going up the thumb was a great way to spend a Sunday. Although we didn’t make it to turnip rock, we got to explore one of Michigan’s many state parks, and learned a little bit about historic Huron county. Now, I’m on a mission to visit the rest of Michigan’s state parks! I’ll keep you all updated!